The world has seen a lot of victory against many many problems with the help of science and technology but with more than 40 lakh people infected worldwide and around 2.5 lakh death (Now, 80 lakh and 4.5 lakh respectively), this COVID-19 pandemic shows no sign of abating. The numbers are still increasing continuously. In India, the number of confirmed cases has crossed 70,000(Now 4,00,000), and 2,000+(Now 13,000+) deaths have occurred already. As there is no medicine and vaccine that has been invented till now, and the numbers are increasing day by day at a rapid rate, so lockdown is the only way to slow down it’s spreading. On the other side, this lockdown is pushing the economy to an extreme edge. This pandemic has fundamentally changed how the world and India will do business. On 4 April, former RBI chief Dr. Raghuram Rajan said that the corona pandemic in India might be the “greatest emergency since independence.”

The International Monetary Fund (IMF) released data which is saying that it’s global GDP growth has faced a great depression from 3.3% to 3%, which has not been seen since 1930. India is no different; in fact, countries like India will suffer more like a developing and uprising economy country. At the starting of the 21 days lockdown, it was calculated that India would lose 32000 crore INR (the US $4.5 billion) every day. The world bank and some agencies have downgraded India’s growth for the fiscal year 2021 with the lowest figures India has ever seen since India’s economic liberalization in the ’90s. However, IMF projection for FY 2021-2022 in the case of India’s GDP growth is 1.9% which is the highest among G-20 nations. The graph of unemployment has got a sharp inclination. There is an estimation that due to this, lockdown 140 million people will lose their jobs. According to CMIE, the rate of unemployment has increased from 6.7% on 15 March to 27.1% in the week ended 3 May. 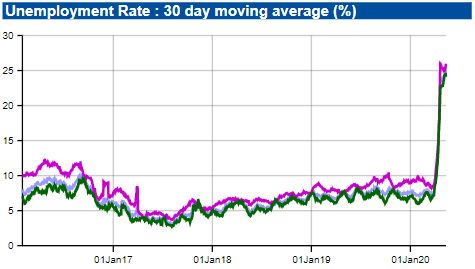 Besides this, more than 45% of households in the whole country have reported declination to their income compared to the previous year. This rate is the highest unemployment rate so far. According to experts, all the jobs related to malls, hotels, restaurants are in grave danger. Initially, this lockdown was only affecting the most vulnerable laborers which are informally employed in unorganized sectors, but this lockdown has started hitting more secure jobs in private industries and start-ups. Young start-ups have been impacted as funding is falling. Some start-ups have announced lay-offs and industry associations have warned for job losses. Even NASCOM, India’s IT association with over 2800 member companies, has warned of job losses. The healthcare and life science technology industry is the only sector that still has some appetite for giving jobs, and these sectors have been impacted least by the pandemic. Only the candidates in job types of analytics and data science will be more open to switching roles. One industry that reflected the pain being felt across many segments of manufacturing is automobiles. 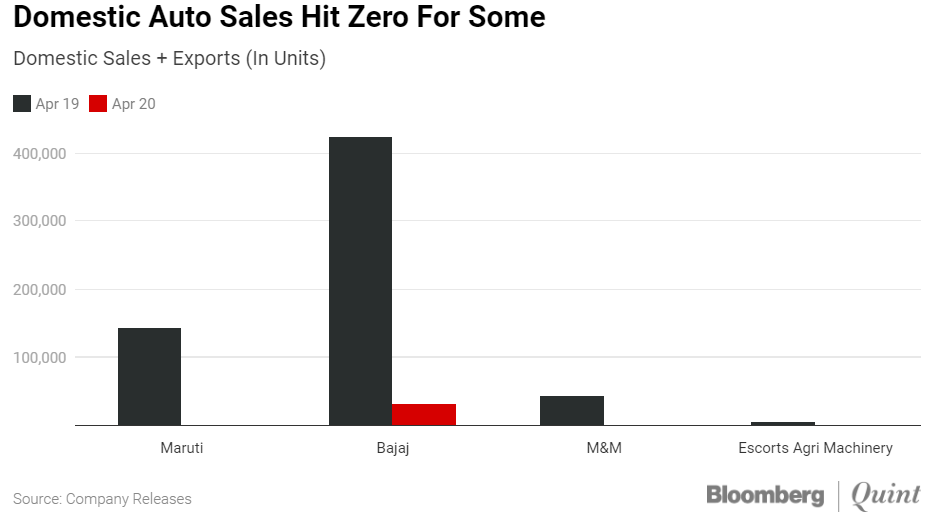 Some of India’s top automobile firms like Bajaj Auto, Maruti Suzuki has reported zero domestic sales. At Maruti, the sales dropped to 0, while 632 units have exported so far. Escorts sold 705 units in the last few days of April after the government gave an exemption on the sale of agricultural machinery from 20 April. The same situation is there in the two-wheeler sector also. Nearly all two-wheeler and four-wheeler companies have put a stop to the production until further notice. iPhone producing companies in India have also suspended a majority of operations. The factories and transports are in shutdown, and this has been created a sharp decline in demand for electricity. 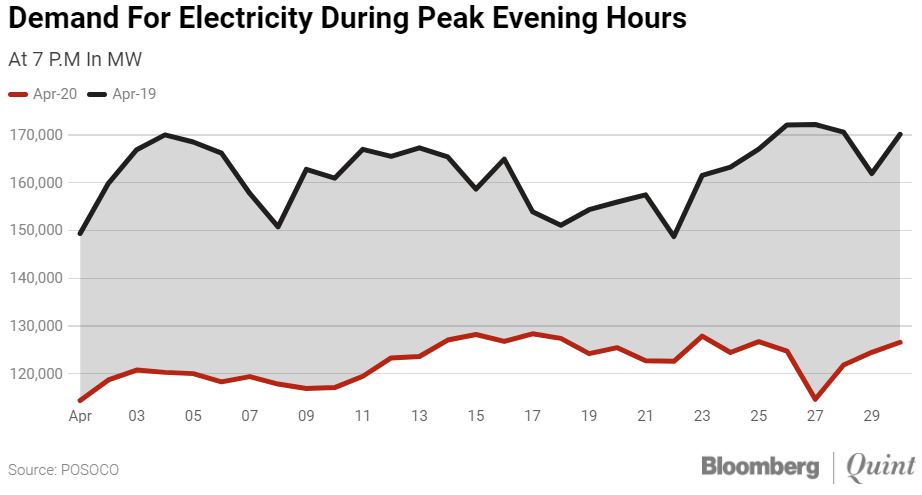 The need for power at peak hours is almost half of the amount of electricity which was demanded the last year at the same time of the month. In the previous month, the average demand has decreased by 36.5%. The closure of transports and negligible factory activities also created a significant impact on the market for oil, which has produced a price fall of oil. India’s fuel demand in April 2020 as compared to last year fell nearly 46%, the lowest since 2007. 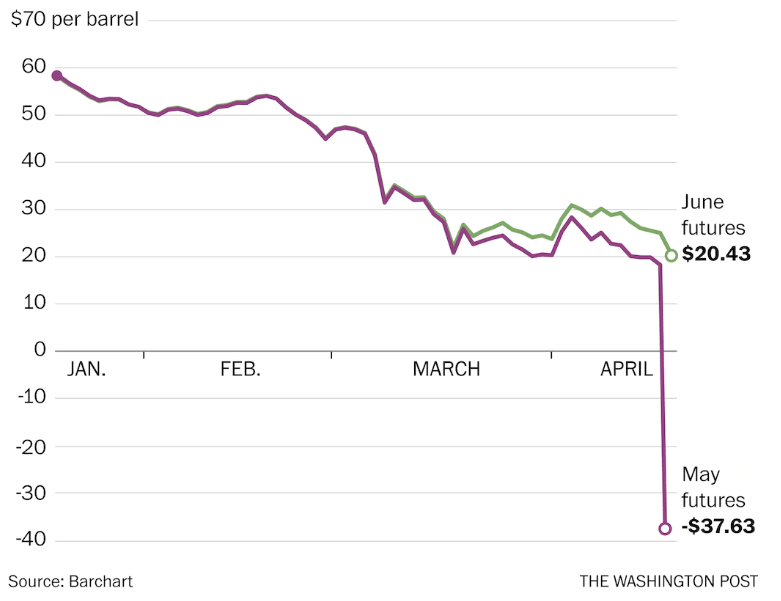 Meanwhile cooking gas (LPG) sales rose around 12%. It has been estimated that the demand for fuel in India’s annual fuel consumption will get lowered by 5.6%. The International Energy Agency has said that globally it’s the smallest demand since 2011, so all their economies that are heavily dependent on oil are major under pressure already. The International Energy Agency also warned that Ecuador, Nigeria and Iraq could be the worst hit, with earnings falling by between 50% and 85% assuming the oil price of $30a barrel. Now it’s less than $20 a barrel. The e-commerce sector is also in almost full shut down due to this virus outbreak. They are only allowed to deliver essential products. On the other hand, this lockdown has also given a sharp impact on the decline in the tourism sector and the transport sector. Many hotels and airlines are cutting salaries and laying off employees. The defense ministry has said that they have postponed all major deals. No deals will be made at the starting of FY 2020-202. It may cause a delay in the delivery of some major equipment.

All these are causing a mass declination in government income. This deficit in government income is arising another concern which is if the income of the government will decrease in this way then where the government will get the money to fight back coronavirus and keep the economy alive. The task force made by the government is also considering the direct cash transfer scheme for the most vulnerable cases, but this can’t be done in the long run. The government needs money to run the country, to give salary to its employees, in the defense sector, development of health and education infrastructure, and many more. It’s not possible to stop all these things yet there will be nothing in hand for fight back to corona. From this recent depreciation in all fields of the economy, it seems that the economic danger of the outbreak is exponentially more significant than it’s health risks. On 29 April NR Narayana Murthy said that if the lockdown continues, India may see more death due to hunger than from the pandemic. To make a new medicine or vaccine for a new disease is not a task of a short period. Time has to be given to scientists for better results. Experts across the world are saying that it may take up to two years. It’s not possible to shut down the economy for this extended period. All the activities have to be started to run the country. We the people have to learn the way to live with this virus without getting infected.

About the author: Subhajit is a second-year student of the Indian Institute of Science Education and Research (IISER) Bhopal and pursuing studies in the BS-MS (dual degree) program. His interests are based on theoretical microeconomics and computer science. Other than that he loves to read various types of books and do creative writing in Bengali.

Disclaimer: The article was written a few weeks back and hence some of the figures used may not be up to date.

2 thoughts on “The Attack of Coronavirus on the Economy!”